Learning the track
NKHTGT endeavours to visit a new track every year, and for 2022 we chose Anderstorp, the former Grand Prix circuit in Sweden. We were made very welcome by the local club and officials and thoroughly enjoyed the experience. Having been treated to a pair of dry practice sessions, it was all change in qualifying as a wet track greeted the NKHTGT competitors. Everybody was well behaved so there were no interruptions, although a certain orange V8 did end up in the gravel trap. Late entry Hans Beckert was at the top of the timing screen in his Mini Cooper, until Kennet Persson just managed to pip his time with some amazing car control in the GT40. Dante Rappange took 3rd in another Mini. Bas Jansen was 4th and fastest of the V8 touring cars in his Mustang. Mark Dols qualified his Marcos 5th just ahead of Jan Magnussen in a Turner-Ford. René de Vries (Cooper S), Martin Bijleveld (Ford Falcon), Roelant de Waard (Shelby GT350) and Otto Rheedz-Thott (Ford GT40) rounded out the top-10 of the 33 car field. Unluckiest man of the weekend was Marcel van Laarhoven, who suffered a terminal engine problem in his Shelby Mustang GT350 and had to sit out the rest of the weekend. 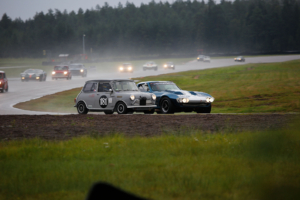 Race 1: Max Campagne
Michiel Campagne was the winner of the first ever NKHTGT race at Anderstorp. He made a Max-like start from 16th to power his Corvette Grand Sport into the top-6 within a lap. Meanwhile Kennet Persson took the lead in his GT40 from Hans Beckert in the Mini, with Martin Bijleveld (Ford Falcon) and Dante Rappange (Mini Cooper) in close contention. The track was very slippery but dry enough for the big V8’s to pull away a little bit. Campagne had just managed to pass Persson for the lead when the race was neutralized to remove Bert Mets’ Mini and Lars Bondesson’s Elan from dangerous positions. With the field bunched up behind the safety car there was time for a one lap sprint to the flag. Bijleveld managed to outbrake Persson at the end of the long straight and as they entered the next corner side by side the GT40 lost traction and swerved onto the grass. Michiel Campagne pulled ahead and won the race with Bijleveld just 0.9 of a second behind. Hans Beckert on his Mini performed a great overtake on Bas Jansen (Ford Mustang) to take the last podium place. Roelant de Waard drove a very fast last lap to take fifth overall and first in GTS12 to preserve his championship lead. Dante Rappange came home sixth while Persson salvaged 7th. Bob Stevens was first home in GTS10 in his Lotus Elan while Erwin van Lieshout won GTS11 in the Porsche 911. Magnus Lillerskog was the CT08 winner in his Lotus Cortina. 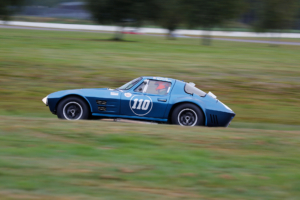 Race 2: Uncatchable de Waard
Roelant de Waard drove his Shelby Mustang to a dominant win in Sunday’s NKHTGT race at Anderstorp. Taking the lead from the start, he set a blistering pace and pulled away while his pursuers were fighting among themselves. Martin Bijleveld outgunned the GTP’s with a cheeky start in his Ford Falcon, then overdid it on the exit of Mattssons and skidded on the grass. Michiel Campagne in the Corvette GS and Kennet Persson in the GT40 rocketed down the straights, but were being harassed in the twisty sections by Hans Beckert and Dante Rappange in their nimble Mini’s. Bas Jansen joined in the fun, displaying some great car control in his Ford Mustang. Next it was Kaj Dahlbacka in the white Corvette Grand Sport who moved up to third, with Bijleveld also moving back in contention, so there were 7 drivers all battling for the podium! As the track dried, the powerful GTP’s were able to stretch their legs and move clear of the touring cars. De Waard was uncatchable though, so Persson finished second, Campagne was classified third and Dahlbacka fourth. Jansen was the first touring car driver home in fifth, ahead of Beckert. Meanwhile Dante Rappange had found a brilliant way of keeping Bijleveld at bay, getting beside the big Falcon on the inside of the Karrusellen, then staying put on the outside line through Depåkurven, so Martin could not put his foot down. Great stuff! Bob Stevens won GTS10 in his Lotus Elan, while Brian Lambert was the winner in GTS11 in his MGB, after Erwin van Lieshout had trouble getting his Porsche 911 started on the pre-grid. Magnus Lillerskog stalled his Lotus Cortina on the actual startgrid, but still managed to reel in Gerrit Jan van Leenen’s similar car to win the CT08 class. 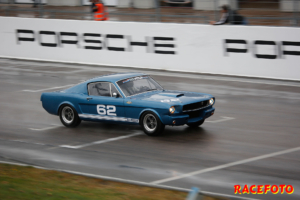 The official NKHTGT photographer at Anderstorp was Bengt-Åce Gustavsson. If you are looking for hi-res pictures of your favourite car/driver, contact Bengt-Åce directly: bengan@racefoto.se. 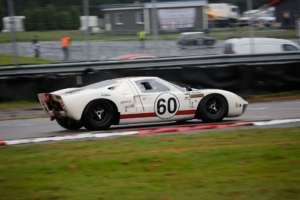 You can read all the paddock gossip in our online magazine: https://www.nkhtgt.nl/wp-content/uploads/2022/09/NKHTGT-Anderstorp-2022-editie-high-res-1.pdf 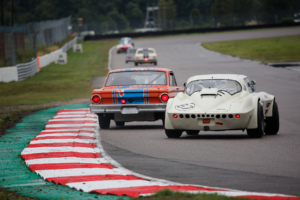 On the way to Anderstorp