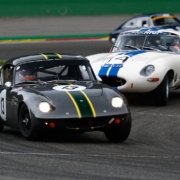 Thanks to the British CSCC drivers and a burst of sunshine, a mainly dry track greeted us for qualifying. Fireworks were to be expected from the two GT40’s and the two Corvette Grand Sports, and indeed it was Kaj Dahlbacka who took the pole in the white Corvette. However, Andy Newall was only 0.1 of a second behind in the E-type Jaguar. Michiel Campagne set the third fastest time in the blue Corvette, with David Pittard fourth in the first of the Lotus Elans. Next up were the GT40’s of Kennet Persson and Armand Adriaans, but they were split by Roelant de Waard in the Shelby GT350. Alexander Schlüchter (Lotus Elan), Oliver Douglas (Cobra Daytona) and Jos Stevens (Lotus Elan) rounded out the top 10. Carlo Hamilton, Bart-Jan Deenik and Martin Bijleveld were fastest of the touring cars in their Ford Falcons and qualified in positions 11-13. First in GTS11 was Thijs van Gammeren in the Porsche 911, while Peter Störhmann set an impressive 3:13 laptime in his 1,2 litre Lotus Elite. First of the Mini’s was the father and son team of René and Thijmen de Vries while Ralf Wagner was quickest in CT08 in the Lotus Cortina.

The Corvette Grand Sports proved superior to the GT40’s in Saturday’s NKHTGT race. Kaj Dahlbacka and Michiel Campagne dominated the first race at Spa, with the Swede taking the win. Alexander Schlüchter took the fight to the GT40’s in his Lotus Elan, but in the end had to let them go. Kennet Persson claimed the final podium spot after fighting off a challenge from Armand Adriaans, who finished fourth. Schlüchter took fifth and first in GTS10, from Bob and Jos Stevens. An off-track excursion by Fleming Andersen resulted in a safetycar period. When things went underway again we were in for an exciting four lap sprint to the finish. Carlo Hamilton and Martin Bijleveld treated the spectators to a great show, swapping positions while fighting for the win in CT10 in their Ford Falcons, Hamilton coming out on top. Christoph Germain was the winner in GTS12 in his Jaguar E-type, beating the similar car of Rhea Sautter, while Thijs van Gammeren won GTS11 in the Porsche 911. Thijmen de Vries was first across the line in CT07, the Mini Cooper class, with Bert Mets classified second after a clean fight with Dante Rappange. In CT08 Robert Wagner fought off a challenge from Bert Du Toy van Hees and once again was king of the Lotus Cortinas.

Sunday’s race was very exciting, with a five way battle for the lead. Early leader Dahlbacka was the first to leave the scene when he accidentally switched off the electrics. Michiel Campagne then took over at the front in the other Corvette Grand Sport, under constant attack from Andy Newall in the Jaguar E-type. David Pittard had started 13th in the Lotus Elan but posted some amazing laptimes and was soon harassing Kennet Persson in the GT40 for 3rd. A short safety car interlude closed things right up, and when both Campagne and Newall lost time on lap 6 it was all change at the front, Pittard now leading from Persson. Persson then pulled out the stops to set a series of 2:51 laps, which was enough to pass the Lotus and stay ahead until the flag. Alexander Schlüchter bravely succeeded in keeping his Lotus Elan ahead of Adriaans’ GT40 until lap 7, while Oliver Douglas (Cobra Daytona) moved up through the field to take second in GTS12, followed by Roelant de Waard (Shelby GT350). Theo van Gammeren won GTS11 after Erwin van Lieshout had to retire the other Porsche 911. Carlo Hamilton again came home first of the touring cars in his Ford Falcon. Martin Bijleveld was not close enough to challenge this time, losing time when he had to take avoiding action and stalled his engine in the first corner melee. He was in fact lucky to come home second in class, as Bart-Jan Deenik (in yet another Falcon) was rapidly closing on the last lap. Both drivers then outbraked themselves in the Bus Stop chicane, Bijleveld got away first and just managed to cross the line 0,1 of a second ahead. Dante Rappange took the Mini class with some spectacularly fast driving from René de Vries and Bert Mets, while Magnus Lillerskog won yet another trophy for Sweden by bringing his Lotus Cortina home first in CT08.

Results can be found here: https://www.nkhtgt.nl/en/results/

You can read all the paddock gossip in our online magazine: 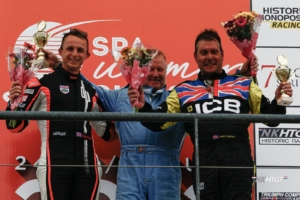