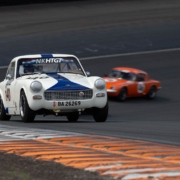 A sunny Zandvoort welcomed the NKHTGT competitors for the traditional “Pinksterraces”. Kennet Persson posted a 2:01.5 lap in his Ford GT40 to take pole. Bob Stevens snatched second at the last moment in his Lotus Elan. Roelant de Waard qualified 3rd in his Shelby Mustang with Michiel Campagne 4th in his Corvette Grand Sport. The third row featured Jos Stevens (Lotus Elan) and Michiel van Duijvendijk (TVR Griffith). We were very happy to welcome yet more newcomers to the NKHTGT family: Ron Sanen with a Lotus Elan, Per Roxlin with an MG Midget, Robert Ingram with a Lotus Elite and a well known Ford Falcon piloted by Henk and Bjorn Hees.

The racing part was somewhat shorter than anticipated, but Saturday afternoon’s race was entertaining nevertheless. Persson took the lead from Michiel Campagne with Bob Stevens in third. Things were hotting up when Frank Veenstra’s MGB deposited its oil on the racing line. It took a long safety car period to powder the track. Meanwhile Campagne reported in the pits after he was shown the meatball for excessive noise. With 15 minutes to go racing resumed. Bob Stevens managed to take the lead with a demon outbraking move, but Persson used the GT40’s power to repass on the straight and take the win. Roelant de Waard came 3rd and 1st in GTS12 in his Shelby Mustang. Martin Bijleveld won the touring car class in his Ford Falcon from the similarly mounted Bart-Jan Deenik and Henk van Gammeren. Bert Mets was on fire and won CT07 in his Mini Cooper, while Frank Wagner continued his Hockenheim form and again came first in CT08 in the Lotus Cortina. Theo van Gammeren won GTS11 in his Porsche 911. The most fun was had by Lars Bondesson (Lotus Elan), Jeroen Hoep (Jaguar E-type), Robert Ingram (Lotus Elite), Henk Hees (Ford Falcon) and Magnus Lillerskog (Lotus Cortina) who had a very entertaining scrap for 21st.

Kennet Persson made it two out of two on Sunday. Bob Stevens kept him honest and even led the race for several laps after Kennet missed a gear when his arm restraint tangled with the gearstick. With normal service resumed the Lotus Elan could not match the sheer speed of the GT40. Jos Stevens (Lotus Elan) took the third podium spot after successfully dealing with Michiel van Duijvendijk (TVR Griffith) and Roelant de Waard, whose Shelby Mustang lost some speed due to a misfire. Martin Bijleveld led the touring cars throughout but threw away the win after an outbraking attempt that was too ambitious. CT10 honours thus went to Bart-Jan Deenik, from Henk van Gammeren both in Ford Falcons. Thijmen de Vries (Cooper S) was the third touring car home and first in CT07 after a storming race. René Wagner was king of CT08 once again in his Lotus Cortina. GTS11 spoils went to Thijs van Gammeren in the Porsche, ahead of MGB-mounted Brian Lambert and Niek van Gils. 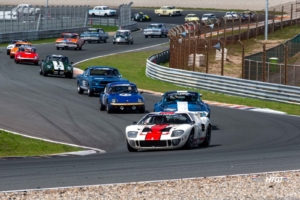 After four races, Bob Stevens leads the championship by six points over Bart-Jan Deenik. Anything is still possible as there are still 8 races to go. The next race on the NKHTGT programme is our traditional visit to the Spa-Francorchamps circuit for the Spa Summer Classic. Spa is a long circuit, which means that we can accommodate no less than 65 cars. We expect a record turnout and will do our utmost to try and reach the magic number of 65! Which is why we invite everyone with an FIA app. K compliant pre-’66 TC, GT or GTS (with valid HTP) for a weekend full of fun on one of the world’s best race tracks. The entry fee is only € 845 and there are two races of 30 minutes each, so two drivers can share a car. After Spa we will continue with races in Assen (5-7 August), Anderstorp (26-28 August) and finally Dijon (7-9 October). At this moment there are still limited places available for all these races. Mail to Egbert at race@nkhtgt.nl if you want to join us, or call him at +316 262 16464. 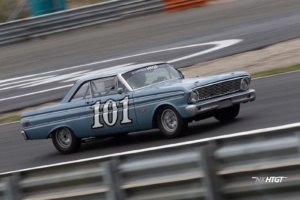 You can read all the paddock gossip in our online magazine: https://www.nkhtgt.nl/wp-content/uploads/2022/06/NKHTGT-magazine-Zandvoort-2022-edition.pdf