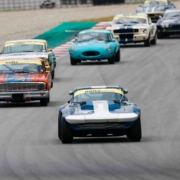 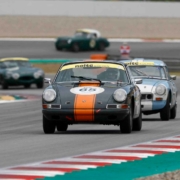 The NK HTGT powered by Nolte Küchen celebrates its 25th anniversary this year. For our loyal drivers there was a gift: a free race. There was a catch however: to receive it, they had to travel to the Circuito de Catalunya, the Formula 1 circuit near Barcelona in Spain. Many did so and it made for an unforgettable weekend.

While it had been sunny and warm all day, there was a rain shower during qualifying. After a few laps, the track became extremely slippery. Andy Newall was on the ball and took pole in the E-type which he shares with Rhea Sautter. Frans van Maarschalkerwaart took P2 thanks to a super fast time on the third lap, when it was still just about dry. Michiel Campagne (Corvette GS) and Mark Dols (Marcos 1800GT) qualified on row 2. The first touring car, the Ford Falcon of Bijleveld and Van der Ende, was on row 3. Norbert Gross (Ford Falcon) was second fastest in the touring cars, ahead of Mini Cooper crews Bert Mets/Christian Frankenhout and father and son De Vries. 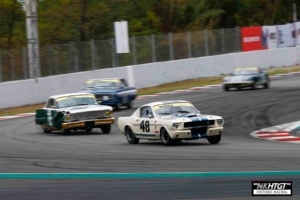 At 8 pm on Friday, it was time for the evening race. Shortly after the start, Michiel Campagne took the lead, followed by Armand Adriaans in the “normal” Corvette. On lap 7, Adriaans came to a stop in a dangerous spot, whereupon the Safety Car was deployed. A number of drivers cleverly benefited from this, in combination with the Pit Window, which opened after 20 minutes. Michiel Campagne left his stop too late, allowing Andy Newall in the E-type Jaguar to take the lead, ahead of Norbert Gross (Ford Falcon) who had passed Martin Bijleveld in the pits, and Erwin van Lieshout who made a giant leap into third with his Porsche 911. Michiel Campagne managed to recover to second place, but could not catch Newall. As darkness fell, the German-British team came home with over a minute’s lead. Gross took the third podium spot and won the touring car class. Mark Dols made several spectacular excursions but still managed to steer his Marcos past Van Lieshout’s Porsche into fourth place. Sixth place fell to Martin Bijleveld in the Falcon. René and Thijmen de Vries finished seventh overall and won the small touring car class in their Cooper S. In the meantime, darkness had fallen and it was time fors ome beers in the paddock was. It was a to be a short night, because on Saturday it was racetime again at 9:45. 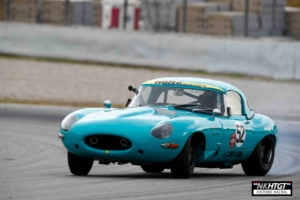 Exactly on time the lights went green and race 2 was underway. Shortly after the start, Hemmo Vriend’s Ford Falcon broke down, whereupon race control immediately deployed the safety car. This caught most drivers by surprise and caused chaos. When the dust clouds had settled, Michiel Campagne was in the lead. Behind was Jaap van der Ende ahead of Norbert Gross in their Ford Falcons and next up a group with Frans van Maarschalkerwaart (Shelby Mustang), Thijs van Gammeren (Falcon), Rhea Sautter (Jaguar E-type) and Mark Dols (Marcos 1800GT). Van der Ende was safe in second place when Gross had to pit to remove a flapping Falcon wing. Sautter fought her way past the competition to take the third podium spot. Frans van Maarschalkerwaart, Thijs van Gammeren and Jac Meeuwissen completed the top 6. Shadowing the Big Healey was Thijmen de Vries who drove a mighty race in the little Cooper S. In GTS11 we witnessed a race of attrition. Dennis Bron (MGA) ran out of fuel and both Porsches disappeared from the scene as well. And thus the honours fel lto Frank Veenstra and Egbert Kolvoort in their MGBs.