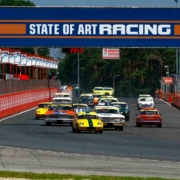 Jaap van der Ende was the NK HTGT powered by Nolte Küchen race winner during the Supercar Madness weekend at Zolder. With his Ford Falcon he took the lead at the start, ahead of Norbert Gross in a similar Falcon. Fighting for third place were Mark Dols in the Marcos and Niek van Gils, Jos Stevens and Luc de Cock in Lotus Elans. Rob Rappange led the Mini class, with Bert Mets in his wake, until Rappange had to make a pit stop and Mets inherited the lead. Dennis Bron in his MGA dominated GTS11. After about five laps, Jos Stevens, the fastest driver in qualifying, broke away from the battle for third place. He calmly waited for the heavy Fords to smoke out their tyres. That moment would never arrive, however, as the race was suspended after about 20 minutes due to an accident. Jaguar driver Roland Zoomers and Armand Adriaans (Shelby Mustang) were having a mighty scrap for the lead in the GTS12 class. After dropping back a bit the Jaguar ran wide and ended up in the tyre barriers. The track marshals immediately gave the unfortunate Zoomers the necessary medical attention, after which he was transported to the hospital in Hasselt. The results of the race were based on the laps completed so far. The atmosphere in the paddock after the race was gloomy. With a fellow driver in hospital, it was decided to abandon the second race planned for the following day. Fortunately, good news came from Hasselt on Monday. Roland Zoomers was able to return home later in the week, and we wish him a speedy recovery. 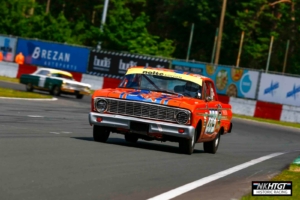 We are looking forward to the Jack’s Racing Day at the TT circuit in Assen, where the NK HTGT powered by Nolte Küchen will racing on August 7 and 8. Do come and see us!

After a year’s enforced break, the drivers of the NK HTGT powered by Nolte Küchen were delighted to be back at Spa-Francorchamps. On this power circuit, Bob Stevens surprisingly set the fastest time in qualifying with his little Lotus Elan. Unfortunately, he would not start the race, as he rolled at the Raidillon moments later, luckily without injury to the driver. Michiel Campagne was second fastest in the Corvette Grand Sport, followed by Armand Adriaans (Ford GT40), Kaj Dahlbacka (Corvette GS) and Roelant de Waard (Shelby Mustang).

At the start, the pair of Corvettes Grand Sport took off, but pursuer Dahlbacka had to drop out when he lost a wheel. Campagne then drove to an unchallenged win, with Armand Adriaans in the great sounding Ford GT40 in second. Third on the podium was Roelant de Waard who dominated the busy GTS12 class in his Shelby Mustang. There was a mighty scrap for second in the GTs, between Jasper Izaks, Hans Hugenholtz and Marcel van Laarhoven in Shelby Mustangs and the Jaguar E-type armada consisting of Rhea Sautter, Eric Douart and Carlo Hamilton. After the mandatory pit stops in this one-hour race, the cards were shuffled and second in GTS12 was for Frenchman Douart, ahead of the duo Frans van Maarschalkerwaart/Jasper Izaks. Jos Stevens (Lotus Elan) had moved up to fifth place overall and was first in GTS10. Theo and Thijs van Gammeren won GTS11 in the Porsche 911, ahead of Egbert Kolvoort on MGB. In the touring car classes things got very exciting. Martin Bijleveld (Ford Falcon) built up a substantial lead, but after the pitstops his co-pilot Jaap van der Ende could not consolidate this. Cees Lubbers and Duncan Huisman (Ford Falcon) now appeared to have the upper hand, until a Drive Through for ignoring track limits threw a spanner in the works. Bas Jansen then? Alas, an hour was too long for his Ford Mustang. And so it was Hemmo Vriend who had kept his nose clean to take the win in his Ford Falcon. CT08 went to Sandro Hubar (Alfa Romeo GTA), after the Lotus Cortina brigade broke down. In the Mini class, the win went to father and son duo René and Thijmen de Vries.

Full results on the results page