The Nolte Küchen NK HTGT is done for 2020, but other organisers can and fortunately still do organize races in their own countries. And if there is a chance to race somewhere, you can be sure that there are NK HTGT drivers present!
Quite a large Dutch delegation went to Portugal to participate in the Estoril Classic. The Estoril Classic is the annual event of Race Ready, the Portuguese historical organisation of Diogo Ferrão. Ferrão had invited Peter Auto to complete the program, which the French did with seven complete grids. Ferrão himself was responsible for the Iberian historic endurance championship, as well as the invitation race for F1 cars, which he is now organising for the third year in a row. Most of the Dutch could be found in the Iberian race, where they made it quite difficult for the locals. Only Olivier Tancogne’s GT40 was ahead of them, but Campagne and Kalff took a nice second place with the Corvette Grand Sport. Rhea Sautter and Andy Newall – also known for their regular NKHTGT participations – came seventh in their E-type, closely followed by Frans van Maarschalkerwaart, who had come to Estoril with his Shelby Mustang GT350. This was not the end of the story, because the top ten was completed by the Falcon of Martin Bijleveld/Jaap van der Ende and the Mustang of Max Boodie. Also Harmen van Putten and his Portuguese teammate Bernardo Sa Nogueira stayed ahead of a lot of Portuguese and Spaniards in their GT350 in 19th place.
Camagne and Kalff had also entered the Group C-races of Peter Auto, but the Spice-Chevy SE92C only managed to finish fourth in the first race. On Sunday, the duo recorded a DNF. Peter Auto-glory was in store for the three cars with which David Hart and Nicky Pastorelli had travelled to Portugal. With the Lola-Chevrolet T70 Mk3B they won the CER1-race and another win came in the Lister-Jaguar ‘Costin’. They almost scored three times: in the Sixties Endurance they missed the top prize by one second in their AC Cobra. 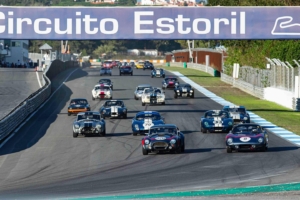 At the Motors Cup at the Le Mans Bugatti Circuit Michiel Campagne, Max Boodie, Harmen van Putten and Jaap van der Ende participated (plus Hans and Carly Meskes in Formula Ford 1600 and 2000). It was good old Jaap van der Ende who took the top step of podium after a touring car class win in the Ford Falcon. 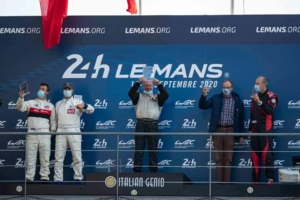 Finally there was the Goodwood SpeedWeek, without an audience but with a live stream and spectacular action. David and Olivier Hart did not make it to the finish in their respective races, but Hans Hugenholtz finished fourth with co-driver Dario Franchitti in the Sir Stirling Moss Trophy, with the Ferrari 250 GT SWB. Karsten Le Blanc and Christiaen van Lanschot finished in 13th place in the Austin Healey 3000 ‘DD 300’.