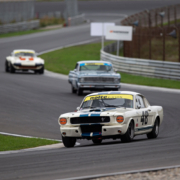 The 2020 NK HTGT season finally got underway at Zandvoort this weekend with two 45 minute races in the Kronos organized Benelux Open weekend, sharing the track with Triumph Competitions. With new sponsor’s Nolte Küchen streamers on the cars, everyone was raring to go. Qualifying was interrupted by a red flag, but the clock was stopped and the session generously restarted after everything had been cleared up. Full marks to Kronos for this, other organizers please take note! Sautter/Newall were fastest on the new GP layout in their E-type, posting a 2:00,8 with Jos Stevens second in his Lotus Elan on 2:01,6 while father and son Jaap and Jacky van der Ende (Ford Falcon) posted the 3rd time in 2:04.8. Bob Stevens (Lotus Elan) meanwhile was languishing in 32nd with clutch problems.

The first race on Friday afternoon saw Newall build up a lead from Jos Stevens. Bob Stevens moved up quickly to fight for fourth with the Van der Ende Falcon, but both retired. After the compulsory pitstop, Jos Stevens managed to overtake Rhea Sautter to take the win. Roland Zoomers took third in his E-type, beating touring car winner Bart Deenik (Ford Falcon). Sjoerd Peereboom and Jasper Izaks won GTS11 in their MGB from Erwin van Lieshout in the Porsche 911. René de Vries (Cooper S) was an impressive second overall in the touring cars, ahead of Bas Jansen (Ford Mustang).

Saturday’s race again saw Newall build up a lead, only for Jos Stevens to take over after the pitstop. Kaj Dahlbacka drove a steady race and took third in the Corvette Grand Sport. Frans van Maarschalkerwaart (Shelby Mustang) managed to reel in Zoomers in the E-type, only to receive a time penalty for a pitlane infringement. Bas Jansen (Ford Mustang) was the touring car winner this time, from Deenik (Ford Falcon) with René de Vries just ahead of father and son paring Rappange in their Cooper S. Peereboom and Izaks again won GTS11 in their trusty MGB. Newcomer Ed van Dijk (Jaguar E-type) was edging ever closer to Hemmo Vriend in his Ford Falcon, but could not make it past. Maybe he can do it at Assen in two weeks’ time!

The next pair of races is at the Assen TT Circuit on september 25-27. There are still entries available, so come and race your pre-’66 FIA touring car, GT or GTP in the NK HTGT powered by Nolte Küchen. We would love for you to join us! Mail Egbert on race@nkhtgt.nl for an entry form.